Last weekend I hung out in the adult Disney World known as Key West with Mrs. Lite Adventurer to celebrate our one year anniversary.  We got married on the beach there a year ago, and while it was an awesome time, it was also very hectic as you can imagine with all the typical wedding stuff going on.  So this year, we wanted to go back and spend a few days relaxing on the island with no plans whatsoever.  It was excellent.

The inhabitants of Key West got really lucky in that most of the island survived Hurricane Irma intact without too much destruction.  The touristy area around Duval Street looked more or less the same as it always has, so whatever damage occurred there was cleaned up pretty rapidly over the last few weeks.  The one monument on the island that definitely took noticeable damage was the Southernmost Point marker.  Here’s what it normally looked like: 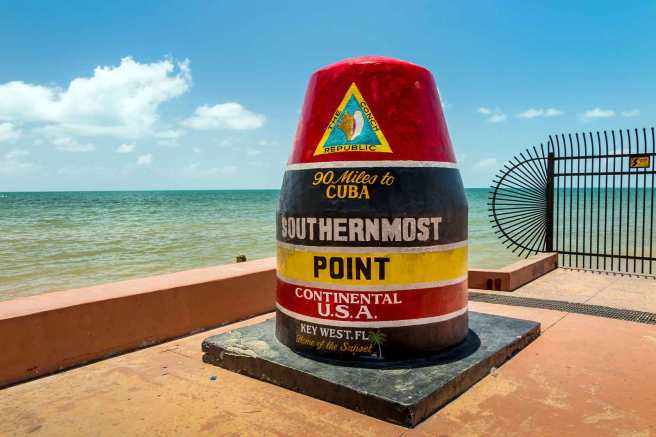 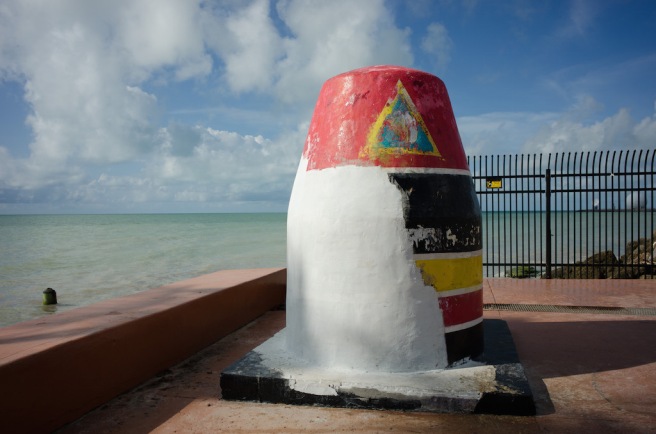 That big white area on the left side was a substantial chunk that was broken off by the storm and recently filled in with whatever building materials they use to re-form this type of structure.  I assume it will eventually be painted over again at some point in the future.

Other than that obvious change, most everything else is still standing and the businesses are up and running again.  Even the street chickens that freely roam the island seem happy and doing their usual chickeny activities.  As the storm approached back in September, some kind soul wrapped up the chickens very carefully and drove them to safety until it was all clear to return.  Read about that cool story here.

Since Mrs. Lite and I both hold Key West very dear to our hearts, we wanted to give some business to a few places that we had already been to before and shower them with tourist dollars, including the Hemingway House and Butterfly Conservatory.

I’m a cat person, so on most of my trips to Key West, I like to stop in at the Hemingway House and say hi to the polydactyl cats.  These are felines with an extra toe on their feet that are the direct descendants of Ernest Hemingway’s original polydactyl cat named Snow White.  They roam the house freely and are very friendly, as they’re used to a variety of humans strolling in and out of their environment all day.

The Butterfly conservatory is another worthwhile stop if you’ve not been before.  It’s an enclosed area full of butterflies as well as a few other animals (including some small pudgy birds) where you can walk around while the butterflies zip by your head and occasionally land on you.

One place we visited for the very first time is Fort East Martello, home of Robert the Doll.  I’m going to save the story of Robert the Doll for another post, but it was a worthwhile excursion, though probably not something I plan on doing on a regular basis.  Due to its distance from Duval Street, this is one of the rare occasions where we had to hire a Lyft to take us there.

As far as nightlife goes, I’ve been to Key West many times before, and this is by far the least crowded I have ever seen the town.  It was still a good party atmosphere at night, especially at the northern end of Duval Street, but not as packed as it normally is.  The recent storms likely scared away a lot of the potential visitors, but I’m guessing that within a couple of months it should be back to the usual scene. 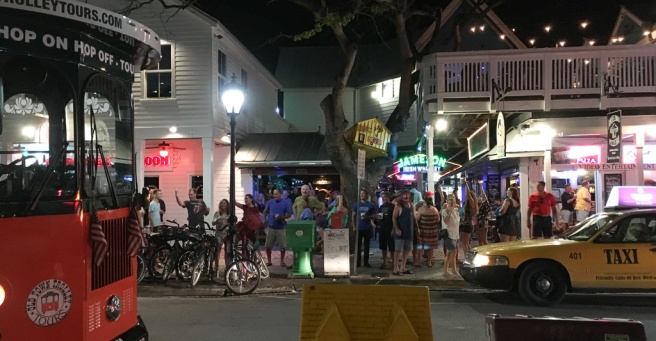 We stayed at a small lodging on the southern (quieter) side of Duval called Orchid Key Inn.  It was our second time staying here, and it is in my opinion one of the best places to stay in Key West.  The location is perfect, within walking distance to most of the interesting sights; the rooms and beds are super comfortable; and the service is excellent. 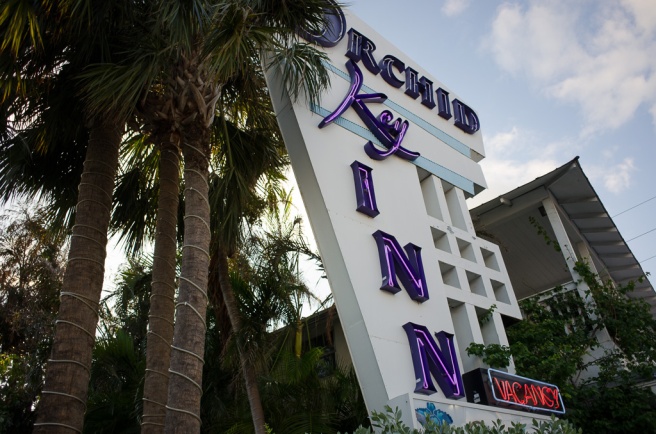 Breakfast is included every day and consists of a tasty buffet of an assortment of delicious items, including a big bowl full of eggs. 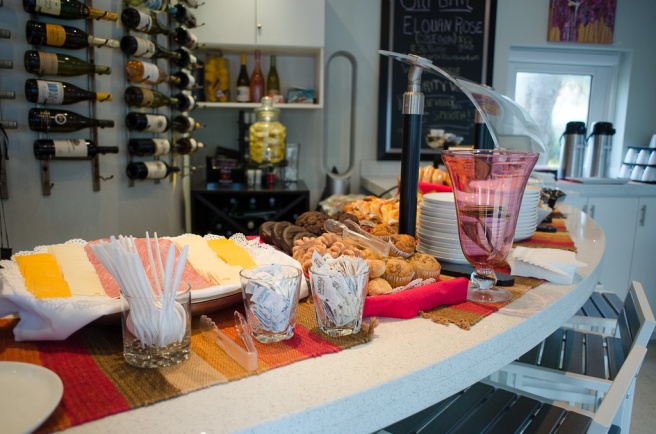 At night, this area turns into a small bar with a good wine and mixed drink selection.  They don’t have too many different beers here (I’m a beer guy), but guests get a voucher for a free drink for each night they stay at the hotel, so there’s that.  I used mine for a bunch of Miller Lites — my go-to everyday beer.

If you’re going to stay in Key West and are able to afford it, I suggest picking a place close to Duval Street.  Most of the stuff to do on the island is around there, and by staying close, you won’t need to rent a car since you can walk most places.  Parking can be a mess, especially during busy hours, so it’s nice to not have to deal with a car if you can avoid it.

On the topic of transportation, a few words.

As of July 2017, Lyft and Uber now [finally] operate on Key West.  We used Lyft to get around the entire weekend, and it worked great.  Never waited more than 5 minutes for a ride.  If you’ve never used either service before, search online for some discount codes for new users to save some money on your first few rides.

One mode of transportation that we considered but then decided against was a pedicab.  It looks kind of like a rickshaw where there’s a bicycle with a bench seat behind it.  The “driver” pedals you where you want to go.  I read a lot of reviews saying that these things can be an expensive ripoff, so we passed and used Lyft instead.  A piece of advice I read about these services is to negotiate a set price before you sit down in the pedicab, so be sure to do that if you ride one of these.  We didn’t want to deal with the hassle of someone trying to con us, so nope.

During our three day stay, we ate some really solid meals, and one of our favorite places was New York Pasta Garden.  Pictured below is the artichoke fritters appetizer.  Like a party in your mouth.  Definitely give it a go if you’re around that area and looking for some good food. 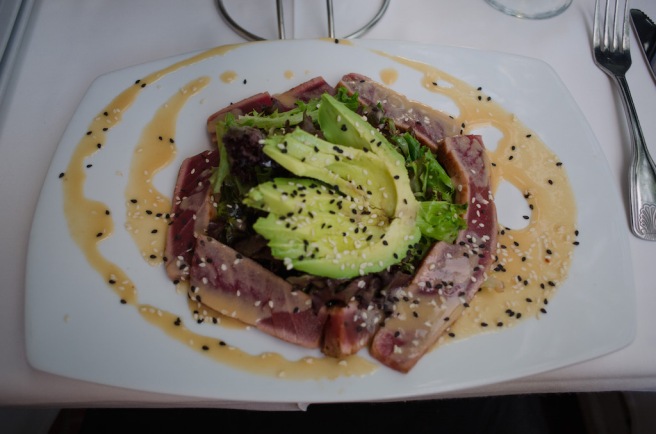 We made the obligatory Saturday night stop at Sloppy Joe’s bar, always a good destination for live music on the island.  If you’re a beer drinker, skip the main bar and go behind the stage to the left for another smaller bar that offers better craft beers for just a tiny bit more expense than a Bud Light.  The two areas are connected, so you can buy a beer there and then bring it to the main room to watch the band. 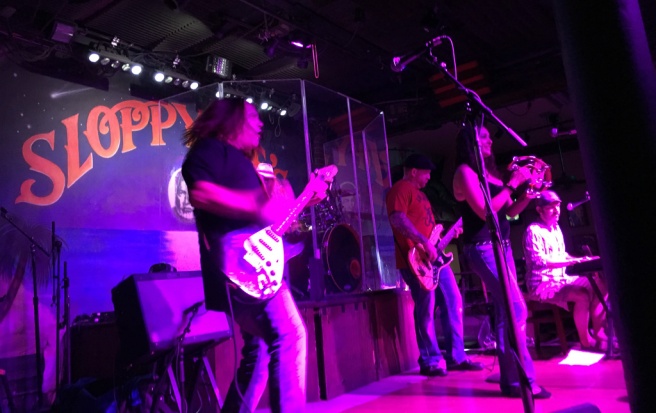 We wrapped up the weekend with some drinks at hotel La Te Da.  This has, over the years, become one of my favorite hang out spots in Key West.  It’s on the quieter side of Duval, and there’s no shortage of interesting people to chat with at the bar.  Entertainment-wise, they have a cabaret show and a piano bar.  Never seen the cabaret show (it’s on the list though), but the guy playing the piano has some exceptional talent.

So that was Key West!  We were happy to see that the area had recovered well after the hurricane, and it was a great time as always.  If you’re looking for a friendly place to hang out and do a whole lot of nothing for a little while, give the island a look.  It’s one of my personal favorites. 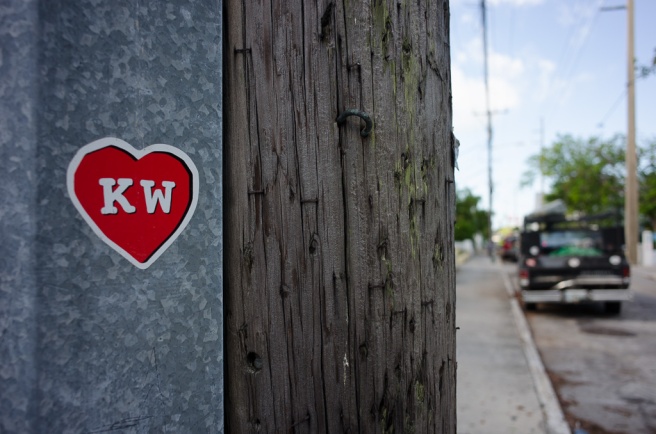 2 thoughts on “Trip report: Key West after the storm”