At the end of the month, I’ll be on my way over the Atlantic ocean to fulfill a lifelong dream and cross off one of the big travel items at the top of my bucket list:  seeing the Pyramids of Giza.  There’s a lot of other really cool stuff in Egypt of course, and I’m looking forward to soaking in all of it.

Tourism in Egypt has really dropped off compared to what it was like pre-2010 before the revolution caused all kinds of disturbances.  Parts of the country are still volatile, but we figured now was as good a time as any to visit the country, and one big positive is that since there aren’t nearly as many tourists as there were a decade ago, it should be less crowded and easier to get our sightseeing done.

Packing for this trip is a bit different than anything I’ve ever done before.  This is my first time to the Middle East, and the types of clothes I plan on wearing are adjusted to respect the local customs.  I did a lot of Google research to figure out what is culturally acceptable there and think I’ve come up with an acceptable plan for what to wear in a predominantly Muslim country so I don’t walk around the entire time sticking out like a sore thumb.  Which I will anyway, but I think it’s still worth putting forth some effort to fit in.

The main wardrobe change that will be completely new for me on my travels is wearing long pants.  I live in the hot southern United States, and around here everyone wears shorts.  I usually vacation in warm weather, so shorts have always been my go to.  However, despite it being balls hot in Egypt, grown men who live there do not walk around in shorts unless they’re at the beach.  To adapt to this regional difference, I’m taking two pairs of pants for daytime and evening use, and one pair of shorts to wear in the hotel room, the cruise ship on the Nile River, and on the flights there and back home.

One pair of pants is regular jeans, which I’ll be wearing exclusively at night when the sun has set and it’s not so hot.  The other pair of pants I bought specifically for this vacation:  Patagonia Quandary Pants.  They’re made of a thin, quick dry material and have some UV protection as well.  I’m normally not a fan of these types of pants and much prefer jeans, but it’s going to be so hot over there that jeans will be miserably uncomfortable during the daytime.  I plan on writing up a full review of these pants after my trip to discuss my experience with them.

The other item that I bought for Egypt was a hat.  I’m not a fan of wearing stuff on my noggin, but I was advised by several people who had previously toured Egypt that a hat is a good idea, if only for protecting my head from the sun.  I found this one made by Kuhl which is super lightweight, and it actually fits my head pretty well without it looking like a billboard (I have a pretty big head).

Other than that, my packing list is about the same:

Here’s a photo of everything: 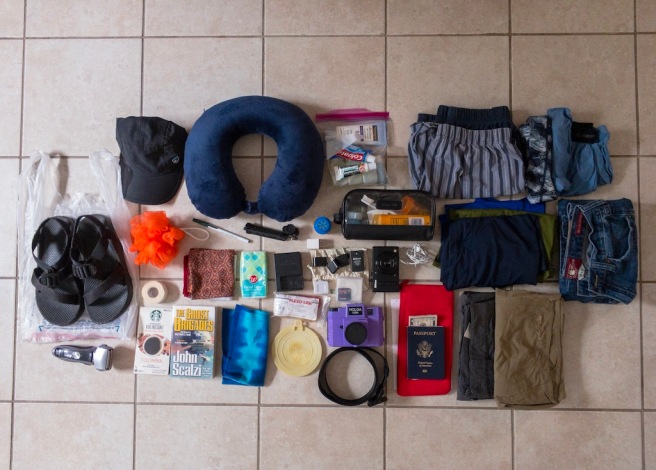 And all of it fits nicely in my backpack.  I’ll be wearing some of these clothes, so there’ll be more room in the bag when I’m on tour. 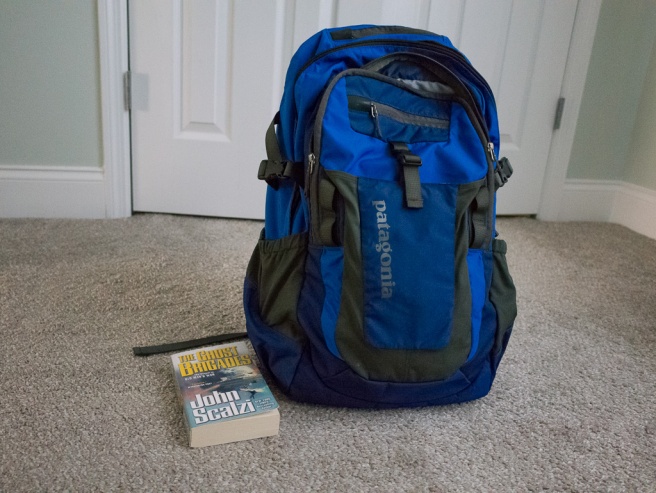